Skip to content
Technicalbob My Life, Travel 19/11/201921/11/2019 5 Minutes
The next day we used klook to see what’s on offer and discover a Studio Ghibli exhibition. We have enjoyed the stunning animations the Japanese animation house has produced for thirty years, but it’s something that is just being introduced in China. My Neighbour Totoro was released there just last year and was well received. It was shortly followed this year by Spirited Away which out sold Toy Story 4 at the box office.
We bought the tickets online, however, the site wouldn’t let us book our time slot as we don’t have a valid phone number. We decided to risk it and headed over there shortly after it opened, via the Australian Dairy to catch up on our scrambled egg and macaroni chicken soup intake. Having read the menu more thoroughly, we got what we wanted this time and had very full bellies once again.

The installation was amazing. They have recreated many scenes from various Ghibli movies into 3D models. We took lots of photos, especially on the sets that allow you to step inside and be a part of the photo. We got our pictures with Calcifer, Totoro and No Face. It was brilliant and we would have bought out the entire gift shop had we the room. I hope the installation is well recieved in mainland China where it is due to start a tour.

We chilled in the afternoon and then went for dinner at the noodle place we ate at before. Again, experience served us well and ordering was much easier this time.
Friday evening, we boarded the Metro to meet up with some old friends from my Megabowl/Tenpin days. They live here in Hong Kong in a lovely flat with a small square footage, it’s impressive to see how well they have utilised the space, fitting in a larger lego collection than we keep in our three bedroom house. Space is at a premium in most big cities and property is expensive here with location, size and floor number all being relative.
We have been graciously invited to join an evening of airsoft. We spent a fun, moderately painful, evening with an energetic group who enjoyed the game and the simple act of just shooting each other.
I’m a fairly good shot with a gun, I know that, but I’m terrible at not getting shot. It was great fun but we were a shade under padded and some of the BB’s left bruises and marks. I thought I did well the first game but I quickly realised it had only served as a warm up. I got shot, repeatedly, in every game I participated in thereafter. We got an uber home, courtesy of our hosts, which was incredibly kind. I only hope we get the chance to return the favours one day. We had been concerned about staying out as the metro closes early due to the protests. We got back to our hotel with little issue and even stopped off for a McDonald’s having worked up a hunger. A good day all round, my false start in this city all but forgotten. 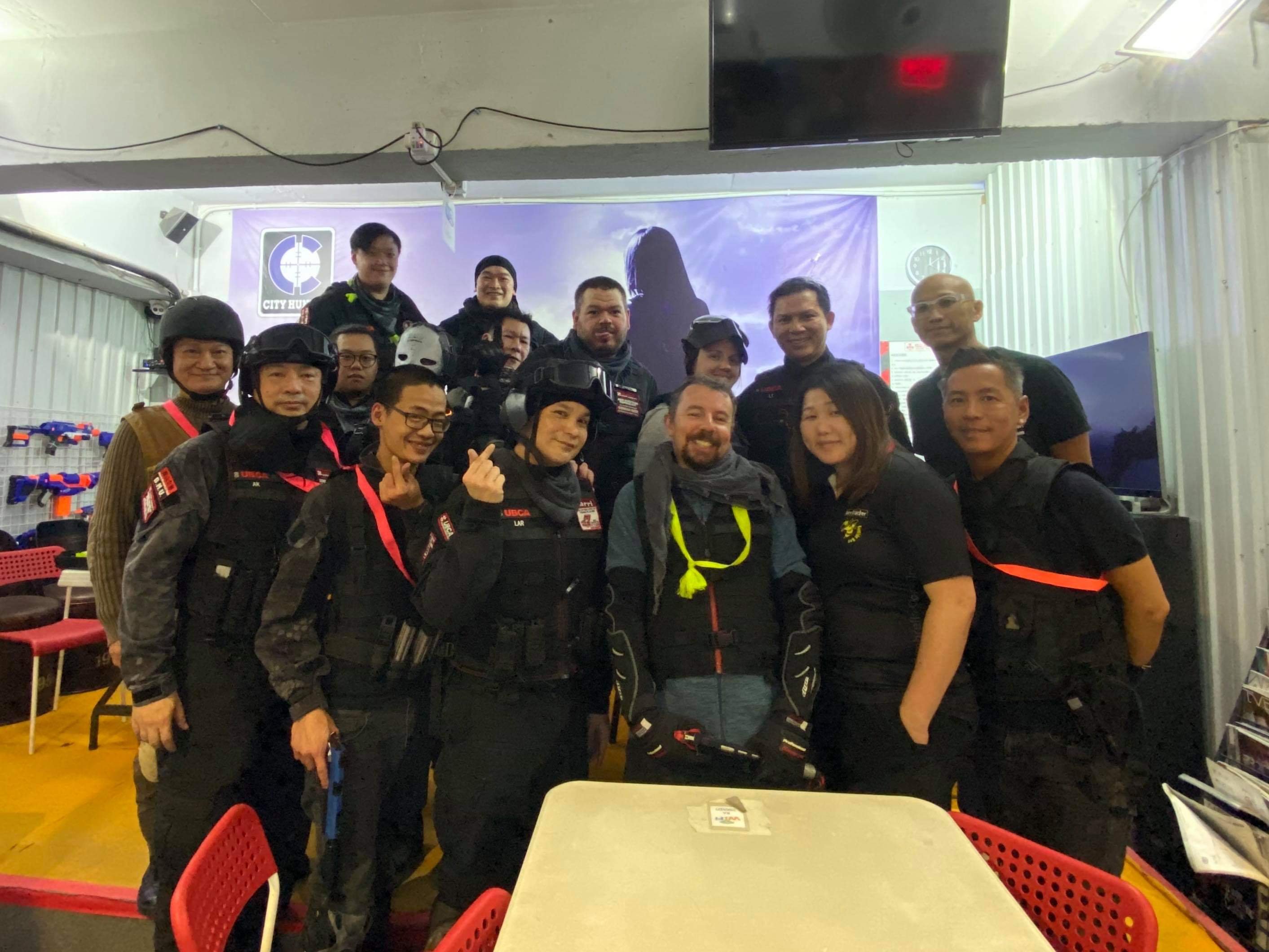 Saturday comes and all the advice we have had is to stay indoors at the weekend, the protesters can pop up anywhere with very little notice. They stick to the city, focusing on infrastructure like MTR stations. Disneyland is safe so it was suggested we go there. We opted to have a chill day. We need them from time to time on this trip. We headed for our favourite eggs then explored the area by our hotel. Its busy, as always, giving us some confidence. We chanced upon a multi-story Lego store with loads of models on display. They have custom built Totoro’s that catch our eye first. They have a Ghostbusters firehouse, a Disney castle, all kinds of Star Wars, Stranger Things, Friends and Big Bang Theory sets. Plus, a favourite in our own collection, Wall-e.
We went to a mall and found a Hello Kitty shop. Finding an entrance to the Metro, we looked in to see if it was busy. It was. People even had kids with them. We decided to brave it and went to one more place we knew of that was nearby. The bird cage gardens. It was described to us as a park with birds in ornate oriental cages. I don’t know why we thought it would be nice. It was horrific. Instantly, we were faced with beautiful birds, either alone in tiny, tiny cages, or together in larger but significantly overcrowded cages. There were a few in nice, ornate cages but they were still very small. It all just seemed a bit too cruel. We didn’t stay long and decided to get some egg tarts. Looking like custard tarts, they are considered a ‘must try’ thing whilst in Hong Kong. They were indeed very nice.Sunday was a very different kettle of fish. We had a McDonald’s breakfast for one thing. Searches for a cheap alternative, to macaroni in chicken broth with scrambled egg on toast, were fruitless. Deciding against using the metro, we walked to the Museum of History. We expected to pay but once again, we were surprised to find free admission. We bore witness to the formation of the area 400M years ago, through the early settlers, opium wars and it’s situation in WW2. By the time we got to the British hand over of Hong Kong we were all museumed out and headed back to the hotel. We went via the local MTR station to find it was closed and lots of body armored and heavily armed police were assembling nearby. This was a concern as that suggested protests were expected.
We went back to the hotel as the flow of people was moving steadily despite the growing police presence. Once in our room, on the fourth floor, we eventually heard sirens. We peered from the window and watched as the police closed off roads and parked 14 riot vehicles right under our window.

They eventually moved on but then a host of protestors walked past peacefully. We saw one guy get taken down by the Police, but not what he did to provoke it.

Once the protestors had peacefully passed, some more showed up to spray paint their mottos and close off the road junction with barriers, orange tape, and a public bin, dragged from somewhere up the road.
We were hungry by this point and decided to risk a return to McDonald’s. It’s only a few doors down from our building. We got there without issue and found full, like any other McDonald’s in the world. We emerged, however, finding ourselves once again face to face with armed police in riot gear. They were simply opening up the junction, allowing the ba led up traffic to flow. They soon headed away from us, affording us a chance to break for the side entrance of our building, quickly returning to our room.
The next morning everything was back to normal, except the bin was still out of place and a shop that has been undergoing repair work now had fire damage to the wooden hoarding outside.
New day, new Disneyland…