What can I say about Mongolia that you don’t already know? Well I’m going to assume, like me before I went, you only know they have a lot of nomads, there are twice as many livestock as there are people and they once had a big old empire, courtesy of one Chinggis Khaan. First of all, Mongolia is big. There are several small towns but UlaanBataar is the biggest and even it’s pretty small by our standards. We were told it was built for 700,000 people. 1.5M people live there, half the entire population of the country. It is crowded and one of the most polluted cities in the world. As a result, 9 out of 10 cars are a Prius.

You can’t drive in the city centre on certain days depending on the number plate of your car and three times a year, on a Sunday, no cars are allowed in the centre and this peaceful community vibe spreads. Children drive battery powered cars and roller skate in packs. People play tug of war on what is normally six lanes of traffic squeezed onto a four lane road. It’s quiet and yet busy at the same time.

There is only one KFC in Mongolia. There are zero McDonalds and zero Starbucks.

There are 2 people for every square kilometer in this country. Remember that half the population lives in just one city. The rest of the country is mostly a vast empty space comprised of the Gobi Desert and the Grasslands. Small villages are dotted around where you can get your punctured tyres repaired, fill up with what smelt like 4 star petrol, if you’re old enough to remember leaded fuel. They have supermarkets with fresh fruit, water and all the Chinggis Gold vodka you could want.

So, our tour took us to see the highlights of Mongolia. The problem is they are all spread out. Each day consisted of getting up for breakfast then piling into the three vans and driving several hours to stop in a village for lunch and then driving some more to get to the next ger camp. Gers are yurts, big tents that are insulated and sometimes have a stove that turns them into an unbearable sauna for an hour before the cold night air slowly creeps back in. 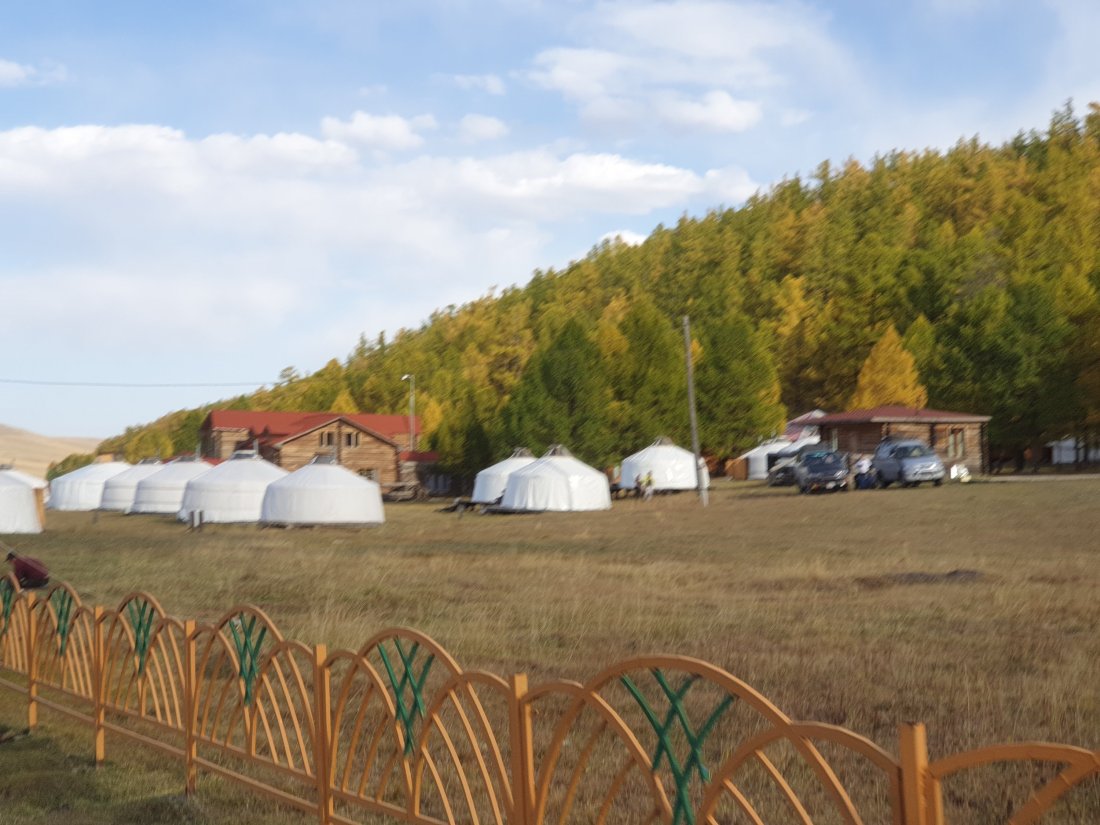 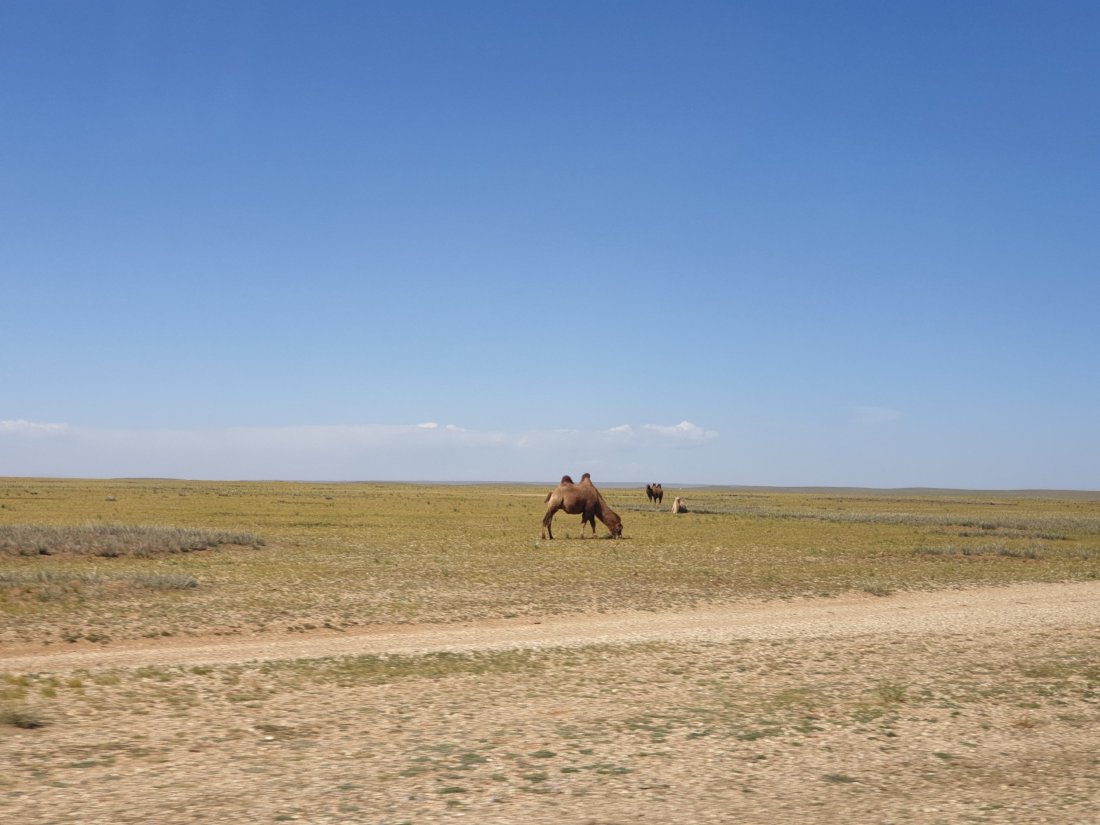 Mongolia is often called the Big Blue Sky. Once you have driven several hours through the desert you can see why. You are treated to an abundance of utter nothingness. I mean an unbroken, 360 degree view of the horizon. No buildings, no trees, no hills, maybe a bush, but not often. The silence is breathtaking and, of course, all that horizon gives you the biggest, bluest sky there can be. In the desert the clouds are sparse and Mongolia is proud of the 240 sunny days it enjoys each year. The temperature drops at night though and we endured -1 compared to high 20’s in the day.

We went to a number of tourist ‘hotspots’. Mongolia is beginning to embrace tourism but it has a long way to go. We went to the flaming cliffs where various dinosaur bones were first discovered. One day, it will have an information centre and proper walkways. Right now, it’s just gravelly slopes and a few bits of caution tape that nowhere near cover all the places you could fall over the edge. They are beautiful cliffs though and they do turn red at sunset, how they earned their name. 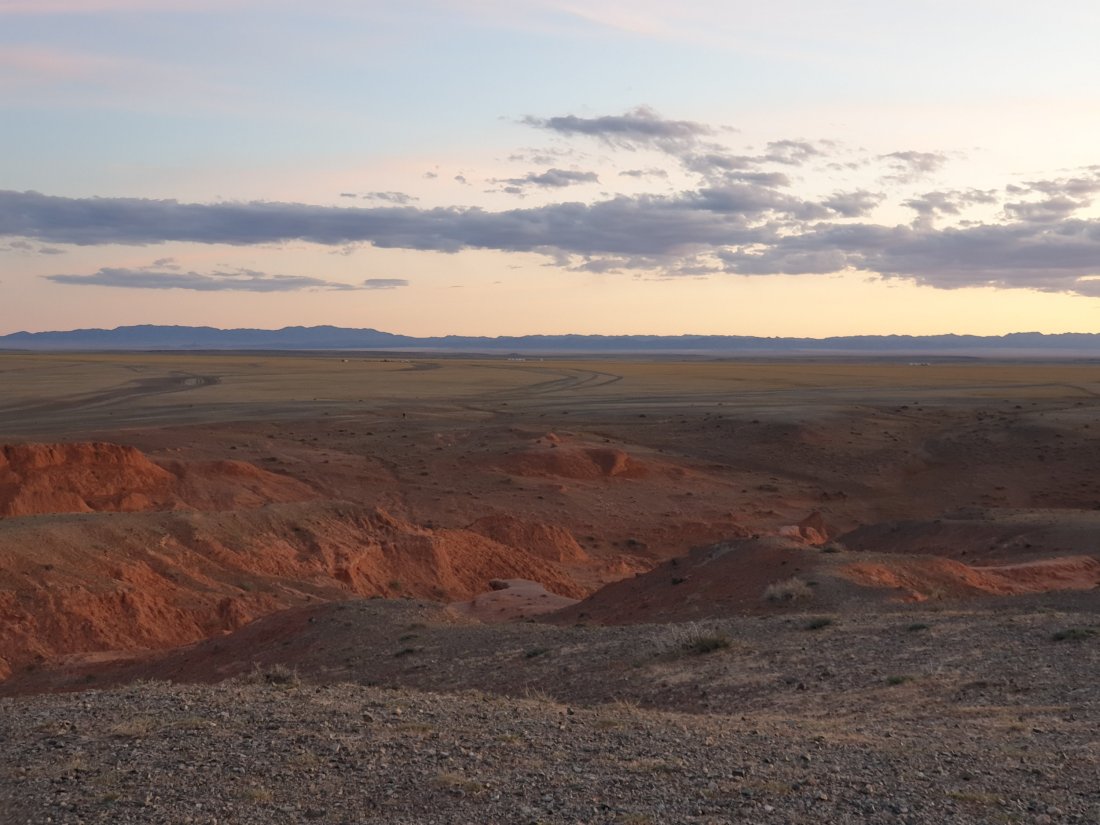 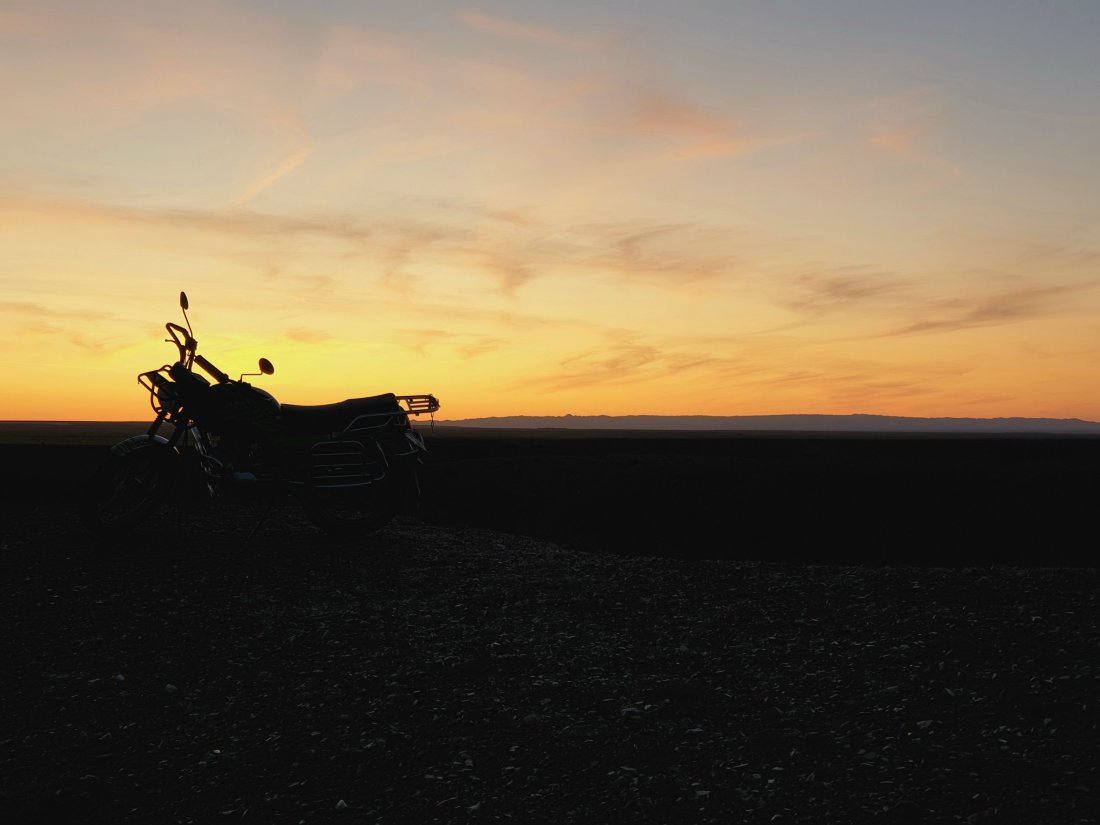 We also climbed the highest sand dune in the Gobi. The singing sands they call them as when the wind moves the sand it makes a whistle. It was a calm day so we had no such action. We were there early too so the sand was cold under our feet to begin with. The sand was different to the Sahara in colour but behaved the same underfoot.

We spent one night camping in tents. It’s a custom in Mongolia that if someone knocks on your door needing food or a bed then you accommodate them. We had a prior invitation to stay with a nomadic family however and they made us feel welcome, sharing their fermented mares milk with our group of 14. The family were living in a shallow valley, miles from the nearest brick buildings. We purchased a sheep from them and they killed it for us so that our drivers could butcher it and cook us a Mongolian barbeque feast. Layers of mutton and chopped onion were built up with scolding hot stones, direct from a fire, placed inbetween each layer to aid the cooking. After several layers of mutton, carrots, potatoes and cabbage were placed on top. This was all in a large steel bowl which was then capped with an identical one. This capsule was then placed atop the stove and weighed down with a big rock and left to cook for one and a half hours.

The veg came out soft and tasty but the meat was still in quite large pieces and, being mutton, was really quite tough. We all ate some and washed it down with some Chinngis Gold vodka and sprite. The celebration went on as the sun went down and our host got increasingly drunk, his wife even showed us how they make their own homebrew vodka from the mares milk.

Our night under the stars was cold, to say the least. The same week the previous year saw snow on the ground, to give some perspective. Our tents outer door didn’t zip up so whatever heat that may trap, was lost to the Mongolian night air. We snuggled up with sleeping bags, fully dressed and wearing beanie hats. It was cold and uncomfortable with no showers and a small tent over a small hole was the only toilet. It was worth it to get a small sense of what nomad life was like. We saw the horses and cattle milked and how they were allowed to roam free over night and herded back in the morning. It was an unforgettable experience, if only for the amazing night sky. We were still in the Gobi Desert and miles from anywhere. If you stared at the sky for long enough you could see the Milky Way. Incredible.

Eventually, we entered the grasslands and saw rolling hills and trees. It was a stark contrast to the Gobi and we spent two days at a hot spring where several pools were fed from the nearby natural hot spring. They ranged from quite cold, through pleasant, to scolding. It was a relaxing place and the food was pretty good too. Though the hot pools slightly lost their charm after I caught the local goats having their turn right at the very source. 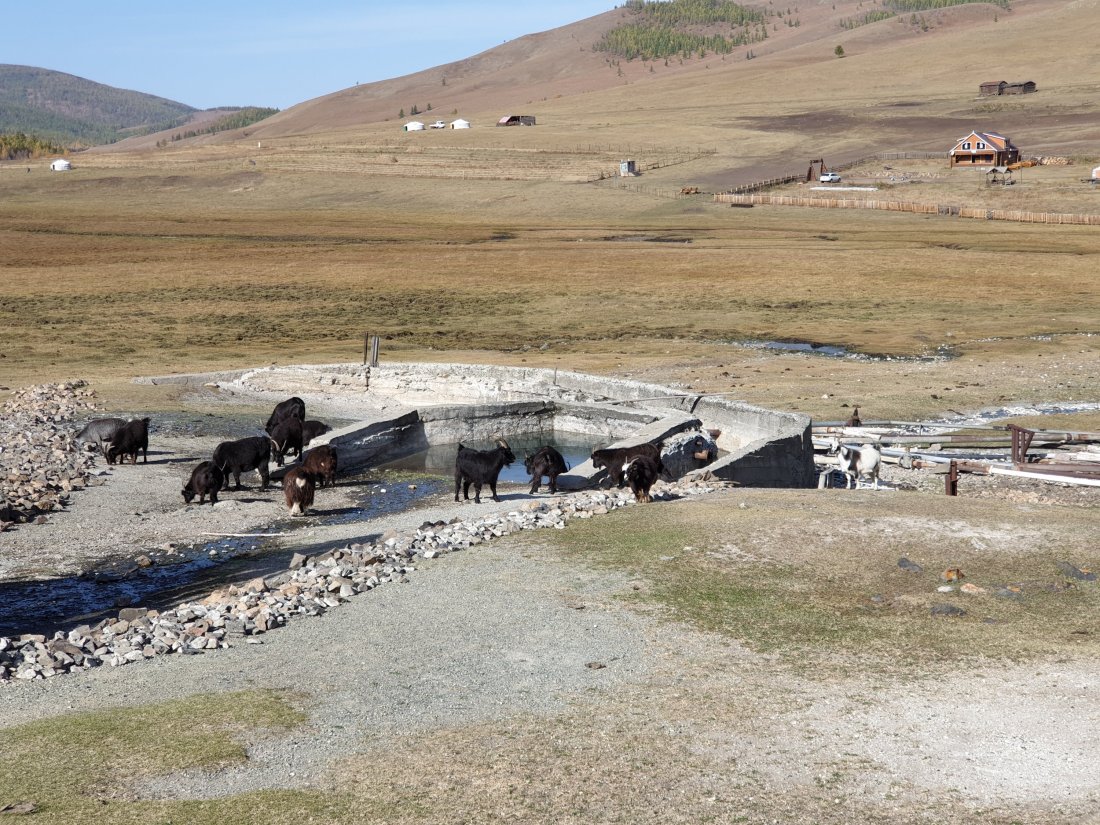 Soon enough we returned to UlaanBataar and felt the distinct claustrophobic feel of a bustling city having been surrounded by so much space and silence for two weeks. The fumes were choking and the noise intolerable. Although, the creature comforts of a hotel room, especially one with an ensuite bathroom and washing machine, quickly made it all the more bearable. You see, outside the city most toilets are simple wooden shacks. Inside are two wooden planks placed over a deep hole. Theres a gap between the planks and that’s your lot. Not a place you want your phone to fall out of your pocket!

We finished off our tour with a cultural show involving authentic clothes, traditional songs and instruments and a contortionist. The star of the show for me, was the throat singer. Not only could he make a continuous harmony with his throat, he could whistle a pitch perfect tune at the same time. He never pursed his lips leading me to speculate the use of his nose for this.

Our last meal was a trip to the only KFC in town. On google maps it lists it as KFC Mongolia, leading me to presume my earlier statement that there is only one in the country. The next day we set off for Chinggis Khaan International Airport to begin a whole new adventure in China, leaving the friendly Mongolian people behind aswell as the great blue sky.

Click here for the start of Country No2 out of 8, China.